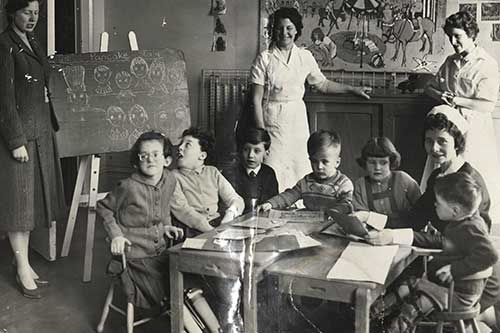 Swansea shoppers will be treated to a trip down memory lane this Saturday, when the Legacy of Longfields Exhibition arrives for its final display at Quadrant Shopping Centre, where visitors will be able to take in the incredible history of the Longfields Association.

The exhibition, which is running from Saturday 28 July until Saturday 4 August at the centre, is in honour of Longfields Association and the incredible work it did over the six decades it was open.

Initially providing children with cerebral palsy an education, in later years it also offered employment to some of its former pupils, establishing a work centre in 1962. The school continued to remain open as a day centre until it sadly closed in 2011. Over the seven days its on display, Quadrant Shopping Centre customers will be able to learn all about the history of the organisation and enjoy photos of the people who worked and studied there.

Lisa Hartley, Quadrant Shopping Centre manager, said: “This is a wonderful tribute to a really special place. Longfields offered so many children in the area the chance to learn at a time when society, sadly, wanted to deny those with cerebral palsy from studying. The school gave youngsters an opportunity to flourish, learn new skills and above all, the chance to shine.

“We are really keen to encourage our customers to take time out of their shopping trip to view this most inspirational display, as it will be the last chance for the community to see this for some time.”

Back in the late 1940s and early 50s, Swansea parents who had children with cerebal palsy, campaigned tirelessly to give them the chance of an education. The first school was initially based in The Grove, Uplands and it wasn’t until a London based philanthropist saw their initiative in the paper that a much larger property was donated to the Association. The Longfields building meant they were then able to open a nursery, in addition to the school.

Teresa Hillier, the project manager of the Legacy of Longfields Project, who also worked at the Association, said: “This was an incredibly unique project at the time and from the moment it opened it proved a huge success, helping to change the lives of children who had been deemed to be ‘ineducable’.

“Since we first launched the exhibition at The National Waterfront Museum in Swansea we have been blown away by the response from the general public, who have found the exhibition to be both fascinating and emotional,” Teresa said. “We are definitely looking forward to sharing our final exhibition with Quadrant Shopping Centre visitors and hope it brings to life the history of the Association.”

The Legacy of Longfields Exhibition is on display at Quadrant Shopping Centre from Saturday 28 July until Saturday 4 August.